We dedicated Signs (Thomas Y. Crowell, New York,1983) to our younger son, Dan, because one day when he was very young, he piped up from the back seat of the car, “You didn’t stop at the stop sign, Daddy!” We had no idea that he could read and this gave us an “aha” moment.  Why not make a book for reading-ready children using everyday signs?  Why not also expand the purpose of the book to include signs that are opposites such as up and down, in and out, push and pull, etc. and a variety of signs that show concepts such as signs that warn you to be careful or signs that tell you where to find help? We decided to end the book with a quiz that tests the child's ability to read signs.

Most of the photos I took are of signs that are familiar to children (the telephone booth will be a mystery to most modern kids!) and the action surrounding the photos give hints as to what the signs say. Children should easily figure out how to read them.


Beneath the slide show you will find a few back stories that tell what we had to go through to get the photos.

Click on the arrow at the top right of the photo to go to the next pages in the slide show of the book below.

We decided that up and down escalators were an effective way to illustrate the signs UP and DOWN.  However taking photos of such escalators was a real challenge.  We needed to find two escalators in a simple space -- an up and down escalator configured so I could photograph it in one photograph.  I looked first in malls. Chaos! Escalators were mostly half hidden, crawling with shoppers, and impossible to photograph because of their location. I then went to downtown Washington DC to look at public buildings. No luck.  I finally came up with a solution -- the National Gallery.  Here we found clean, simple lines and a way to put both an UP and DOWN escalator in the same photo.  The only problem was that, although the lines were clean and simple, and I could get far enough away to photograph the whole escalator, the UP and DOWN escalators are actually side by side. Photo Shop was not yet invented, but I did have a darkroom. Nancy made two signs – a DOWN sign, spelled correctly and an UP sign printed backwards. We mounted the DOWN sign, and then with the help of the National Gallery guards, allowed people only to go down the DOWN escalator.  I took a photo.  We then mounted the UP backwards sign and only allowed traffic to go up on the UP escalator. I took a photograph. In the darkroom, after I reversed the negative of the escalator with the UP backwards sign and people going up and printed it, I was able to position the photos so the escalators were facing head to head. 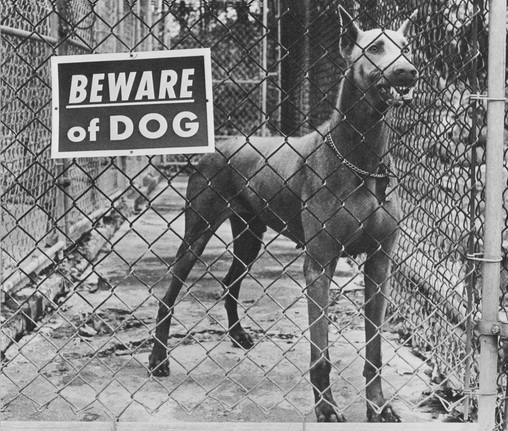 What better way to illustrate a sign that warns of danger than to photograph a Beware of Dog sign with a scary-looking dog? We contacted a security company that leases dogs to patrol warehouses and department stores at night to discourage burglars.  We drove up to the kennels and saw German shepherds growling loudly as they seemed to jump straight up in the air in the confined space of small, but tall cages.  Nancy immediately told me she would stay in the car. When I gathered my own courage and coaxed her out of the car, we found the owner of the kennel. We explained our mission and after donning a thick padded sleeve, he took us to the cage of a vicious-looking Doberman Pinscher. "Dogs have personalities", he told us, "and this one is particularly mean".  He then reassured us that if the doberman got lose it would try to kill him first. Later, when we tried to choose the best picture for the book, we found only one that was not too frightening for young children --- as well as adults.