NO SPECTATORS: THE ART OF BURNING MAN
RENWICK GALLERY

​​Each year, thousands of people (in fact, sometimes more than 75,000) from all over the world flock to the Nevada Black Rock Desert to spend 9 days experiencing the Burning Man festival.  Artists cover the flat desert sand with massive, large-scale artistic installations they have created and have built with the help of volunteers. These sculptures are ritually burned at the end of the festival. The environment is harsh – hot during the day and cold at night with occasional sand and dust storms and few creature amenities, but participants revel in the feeling of community and creativity.

The Renwick Gallery, a branch of the Smithsonian American Art Museum, and built in 1858 in the Nation’s Capital as a museum, has invited artists who participate in the Burning Man festival to create an environment that lets us experience the impact of the real festival.  What I find striking is the amount of time, thought, and handiwork that is put into each structure.

The photos that I took below should give you a feeling of what the exhibit is like:

​Truth is Beauty by Marco Cochrane is an 18-foot sculpture made of stainless steel and lit from the inside and out by hundreds of LED lights. It is one-third scale of the original 55 foot sculpture exhibited at Burning Man festival. 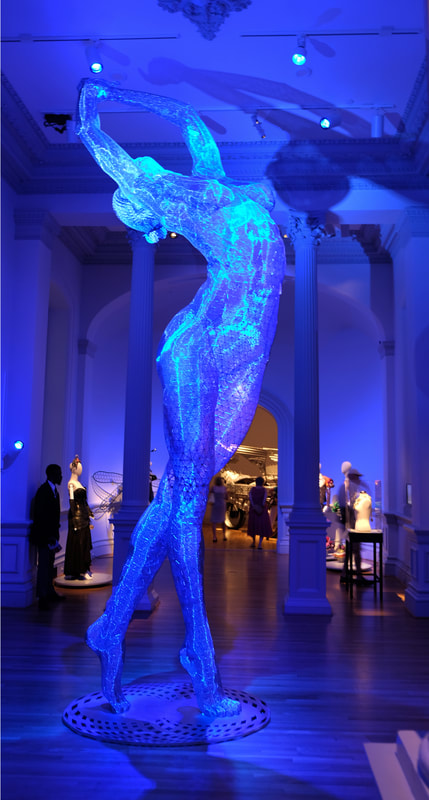 In his sculptures of women, Marco Cochran intends to "de-objectify women and inspire men and women to take action to end violence against women, thus allowing both women and men to live fully and thrive".

​Tin Pan Dragon, created by Duane Flatmor, is a 23-foot animated sculpture built of steel tubing and recycled aluminum that is pedal-powered by 4 people. Its head and neck move and, at the Burning Man festival, fire shoots from its mouth. Be sure to notice the commonly used items such as cupcake and pie tins that make up its structure. 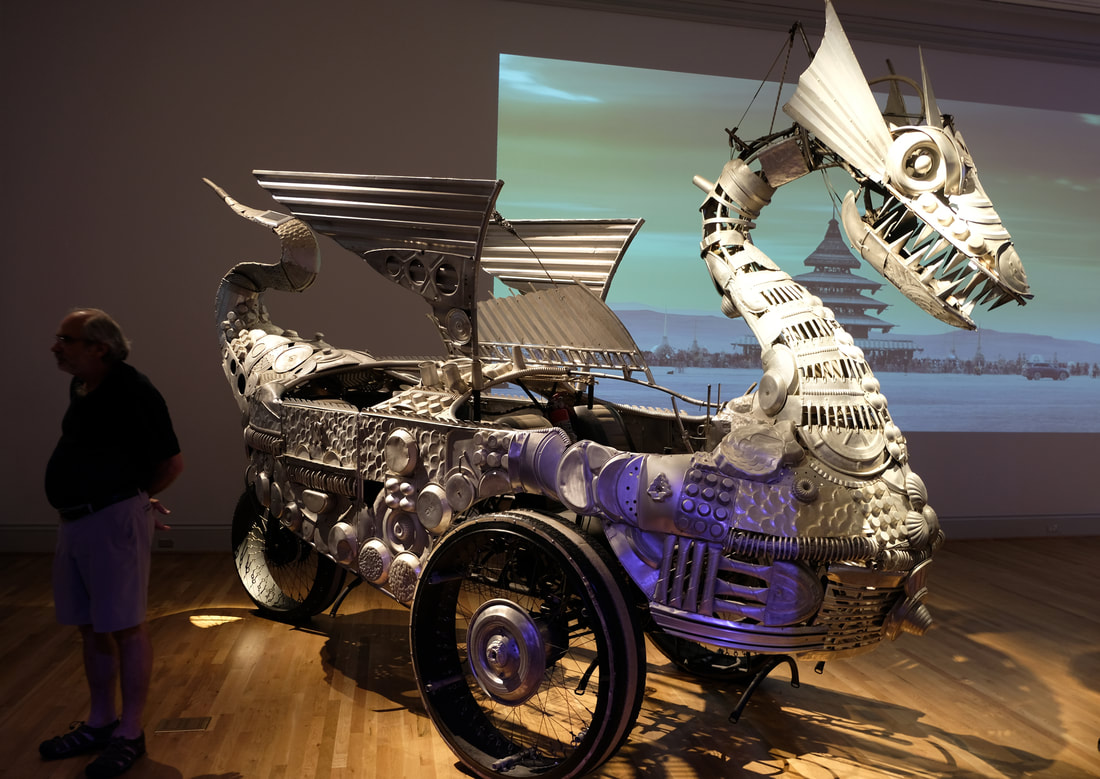 Paper Arch, created by Michael and Natalia Bertotti, is a large, intricate, finely crafted arch constructed of wood and black and white photographs on paper. The densely and carefully arranged photographs evoke the past. They have dimension both as photographs and are often are folded into shapes and textures. 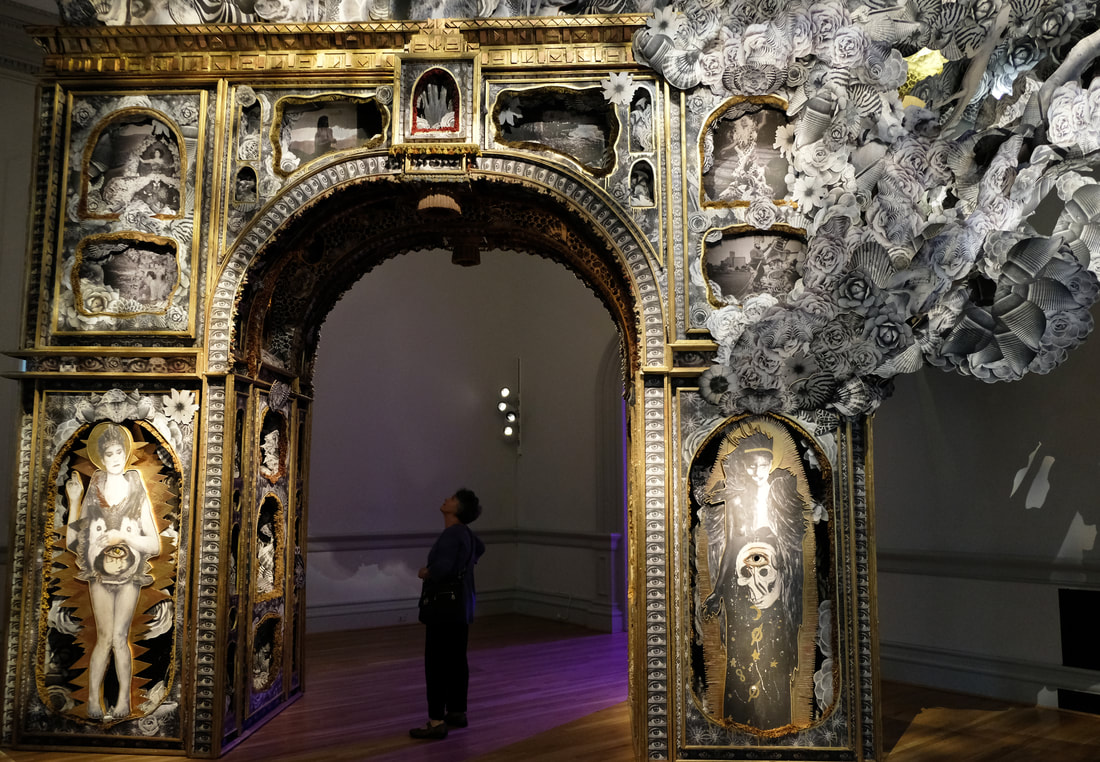 Paper Arch by Michael and Natalia Bertotti is reminiscent of Roman Arches. They developed and created it in an intuitive fashion as they worked. 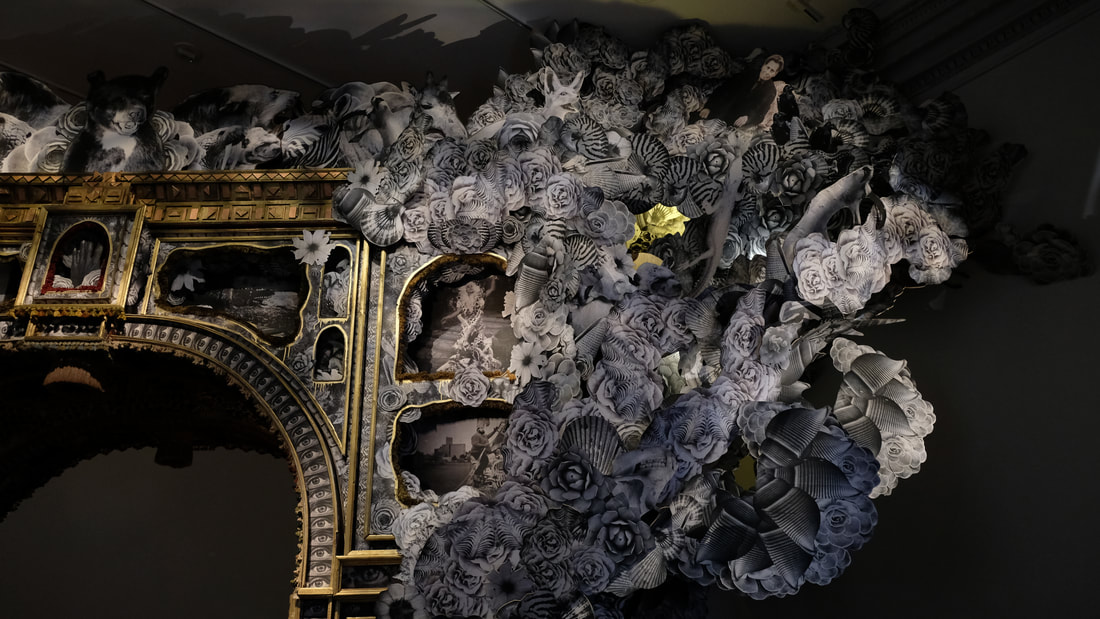 ​Shrumen Lumen, created by Foldhaus Art Collective, "consists of five large-scale Origami mushrooms that grow and breathe in response to human interaction. The mushrooms are entirely made from hand-folded corrugated plastic with over 1700 full-color computer-controlled LEDs inside. The mushroom cap, which is 12 feet in diameter magically transforms from a flat cap to a much taller shape, and this lighting and physical transformation occurs in reaction to users movements on a variety of octagonal pads beneath each mushroom".

​Evotrope created by Richard Wilks, is a giant zoetrope, an animation device invented by William George Horner in 1834, that produces the illusion of motion.  Evotrope is a vehicle composed of 3 unicyles. The person who sits in front steers the vehicle by rotating his hips, the two bicylists in back power it and keep it stable.  A crank spins the wheel to create an image of an eye opening and closing. 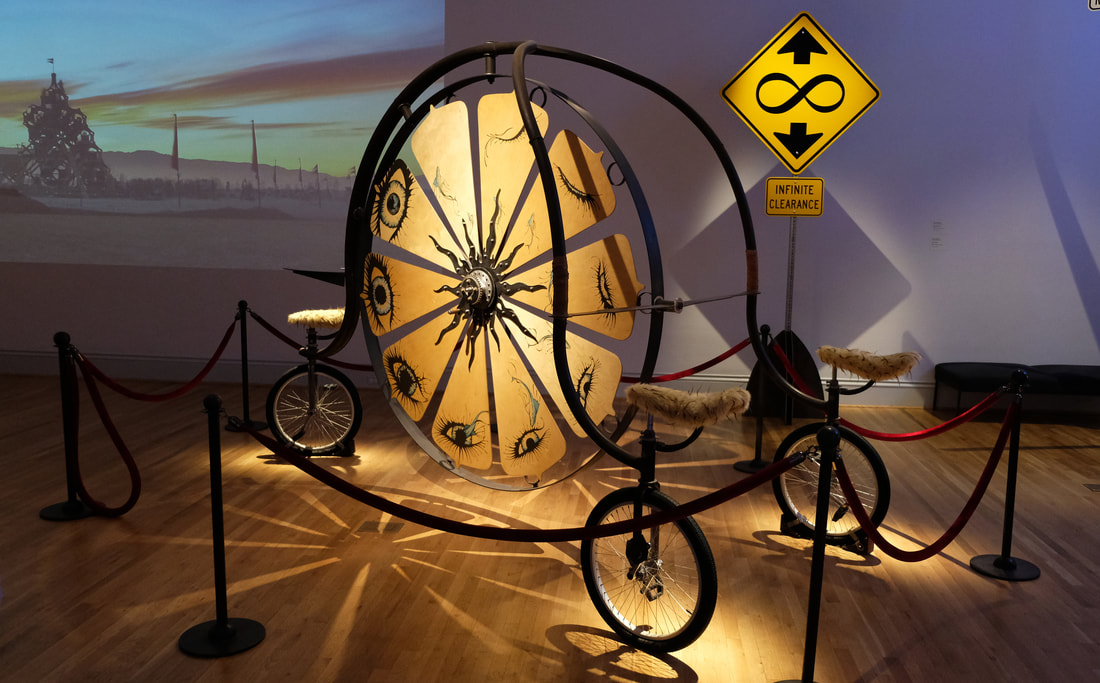 Evotrope, a vehicle created by Richard Wilks, is a giant zoetrope.

​Hybycozo 2018 (Hyperspace Bypass Construction Zone) by Yelena Filipchuk and Serge Beaulieu are composed of lacey 3-D geometric shaped sculptures made from laser cut steel panels lit from the inside by LEDs which create ever-changing geometric spaces and shadows in different colors. 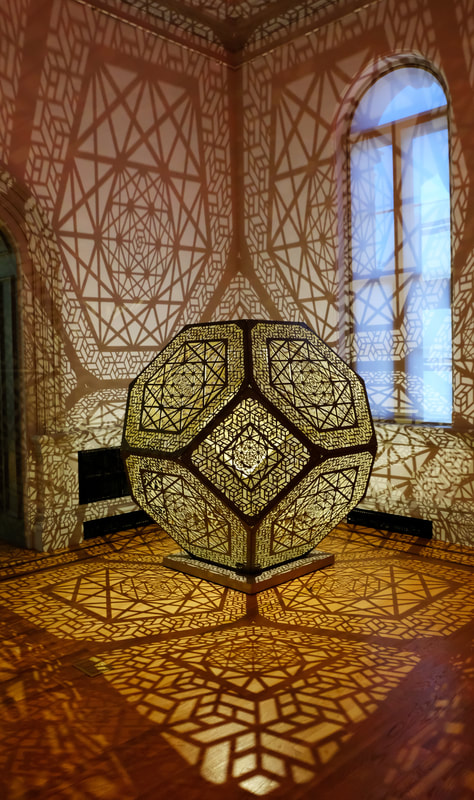 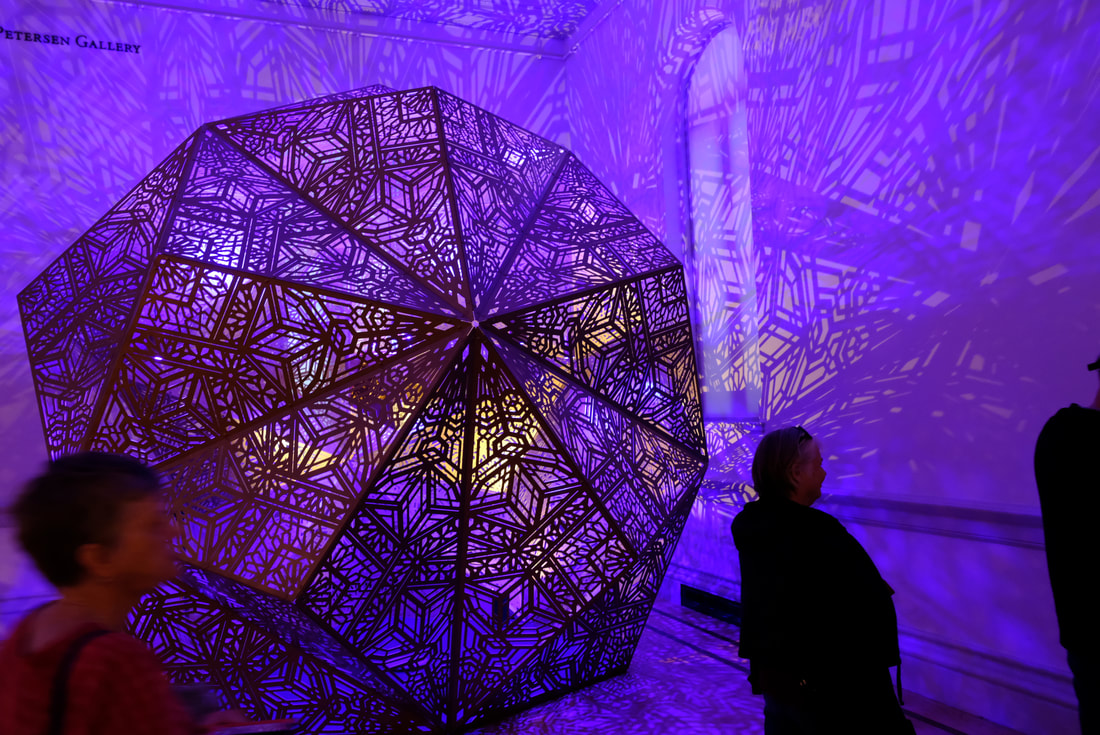 Hybycozo 2018 by Yelena Filipchuk and Serge Beaulieu has changed into a beautiful, purple space. With the change of color, it has become more mysterious and emotional.

Nova by Christopher Schardt invites visitors to lie on beanbags on the ground to watch a giant star hanging in the “sky” above which is constantly changing in a moving kaleidoscope of colors and patterns in time to classical music. 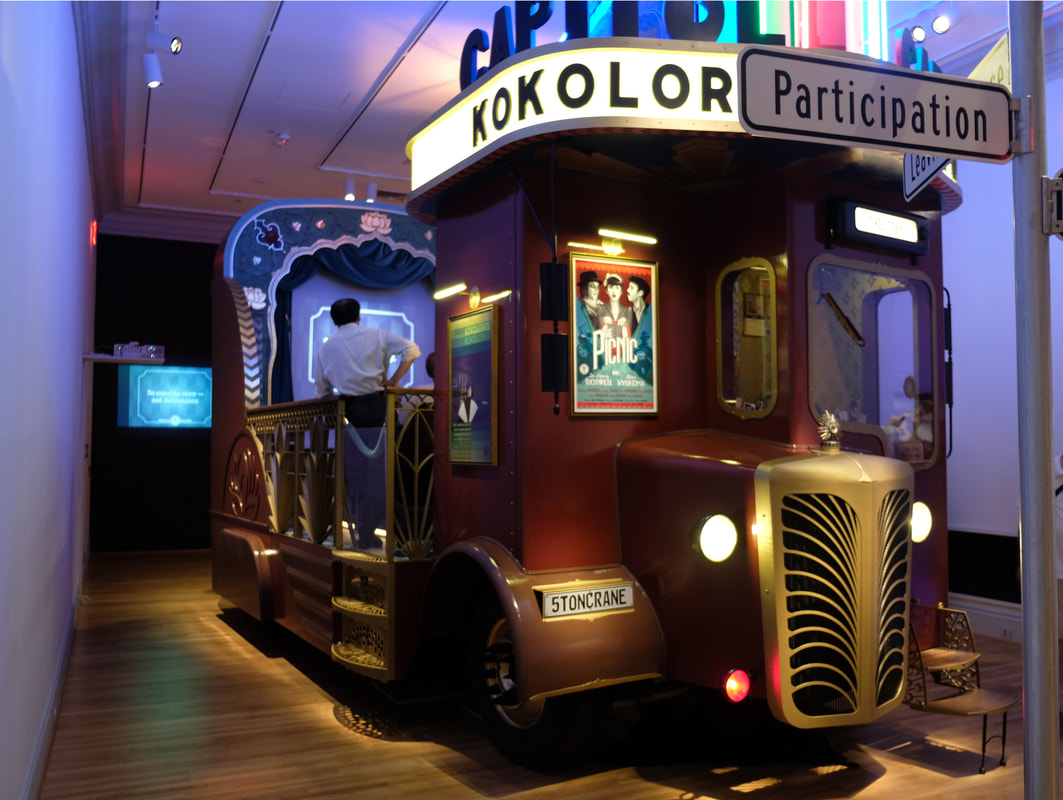 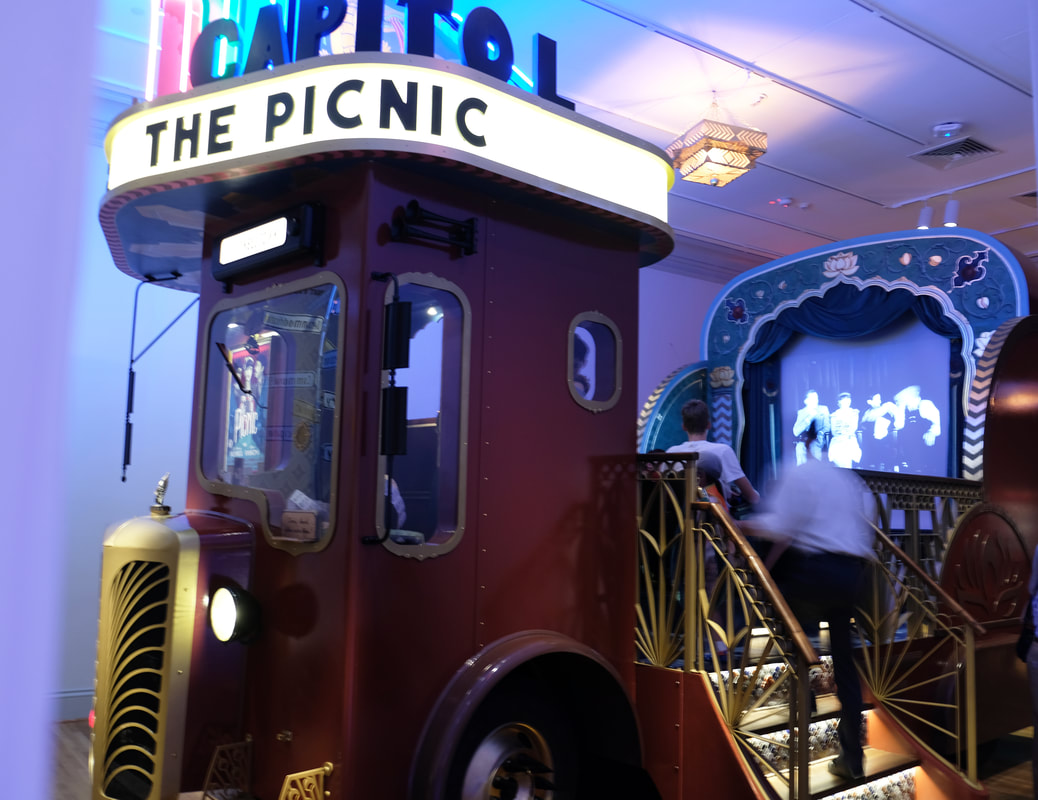 ​Temple, created by David Best is a large, ornate temple interior that is built of recycled wood filigreed panels. The temple, in his words, “is for people who have lost sons and daughters and brothers and mothers and will reflect on that loss and will celebrate their lives rather than grieving. The Temple is nondenominational and open to Republicans, Democrats, Atheists, people with tattoos, people with straight ties on. It is a place where people can go to be forgiven, or to seek forgiveness, or seek solitude from grief."
Since 2000, David Best and his crew have built many of the Temples that are burned “in a cathartic ritual to inspire healing and community” at the end of the annual festival. 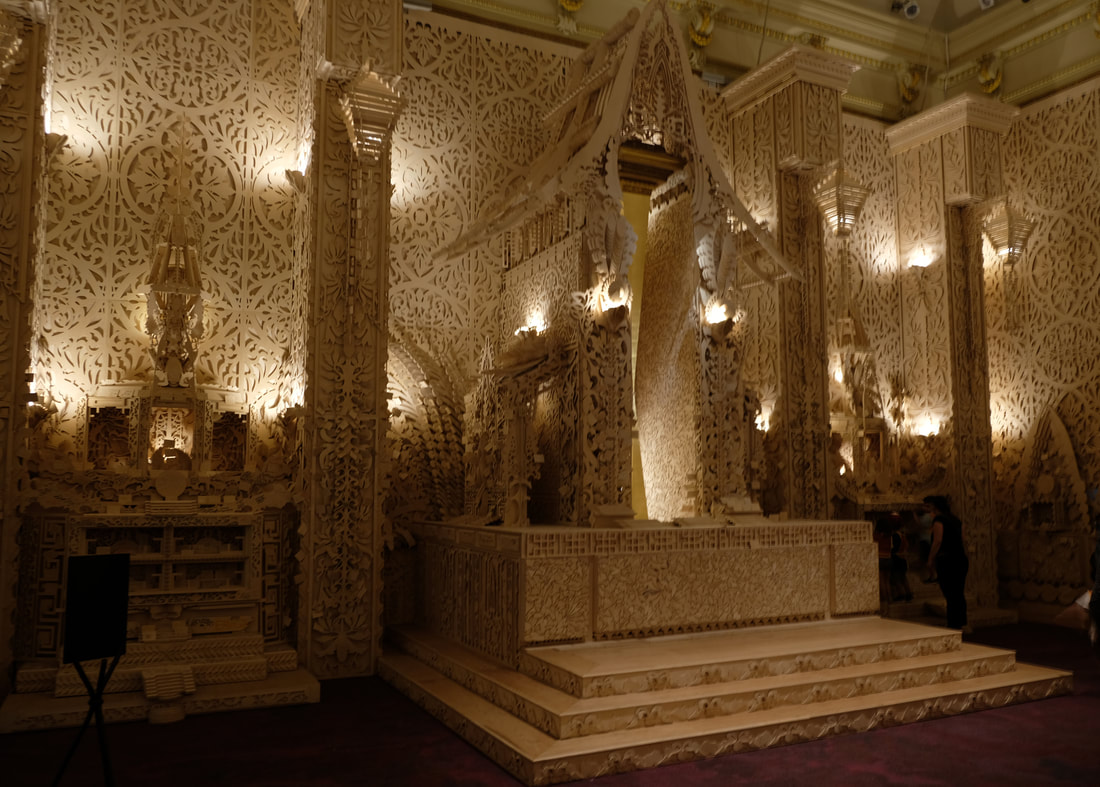 This is an altar in the temple created and built by David Best and his crew. Notice the intricate wooden filigreed that has created this quiet and elegant space.

​Embrace by Android Jones is a painting of the burning of the actual 70 foot high wooden sculpture Embrace built by Matthew Schultz and 50 volunteers that was part of the 2014 Burning Man Festival. 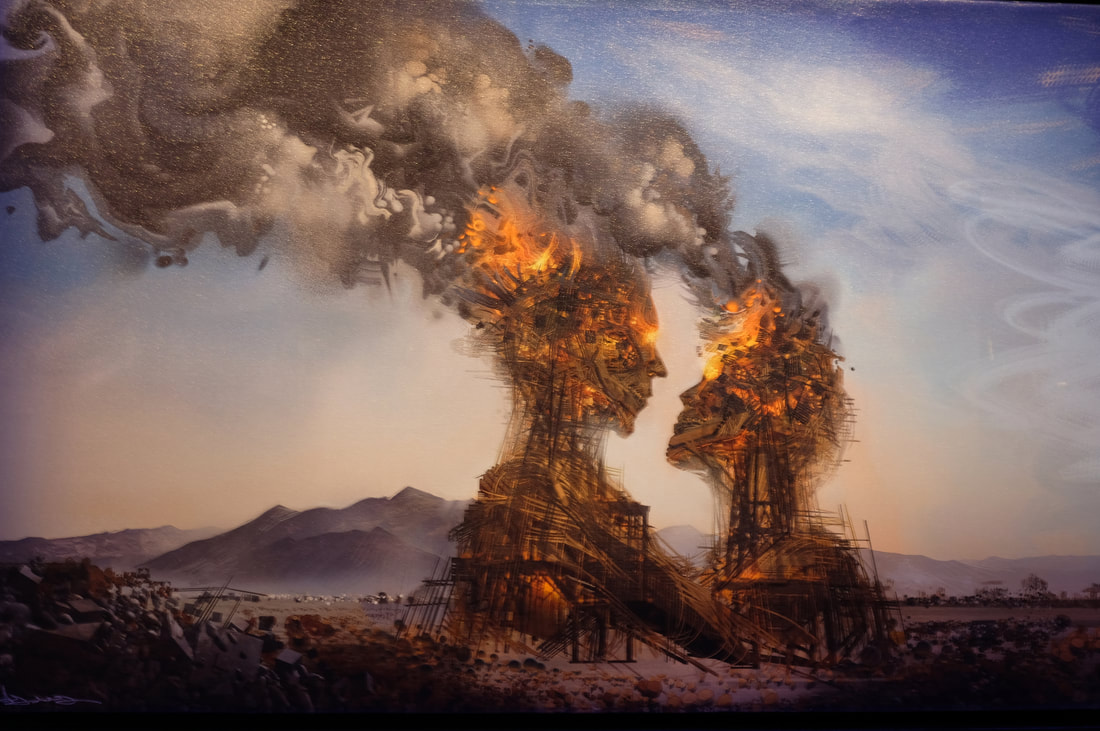