EAVESDROPPING ON AN EAVESDROPPER

I was walking by a Burger King fast food restaurant in Georgetown, Washington DC, when I noticed an older man eavesdropping on a conversation between a young woman and her friends.  Since I was outside the restaurant and on the other side of the street, I could not hear them at all.  But I was captivated (and lucky to photograph) the remarkable emotions of the older man. Was he reacting to the young people’s conversation or just to demons in his head? The beauty of this sequence is that everyone can interpret it as they wish.

Click on the arrow at the top right of the photo to go to the next photo in the slide show below.

I have no idea if these two young people are ballet dancers, dance students, or just very expressive in their gestures, but I was attracted by their “dancing” while seated near the fountain in front of Lincoln Center.  They were so absorbed in their conversation that they never noticed me.

Click on the arrow at the top right of the photo to go to the next photo in the slide show below.

I was walking by New York City Hall and was attracted by the noise of a crowd.  In the following slide show, you will see the incredible death-defying gymnastic feat that I witnessed.  Click quickly on the right arrow to speed up the action.
Click on a photo to enlarge it. 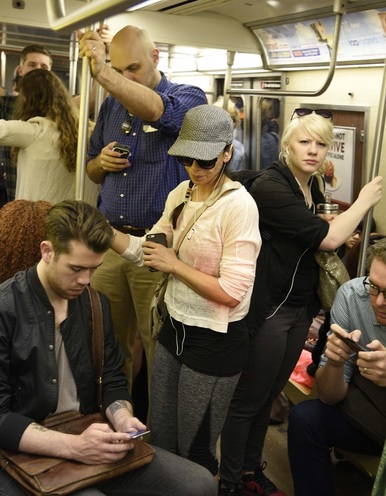