We were wending our way south to Naples to catch a ferry to Sicily and got lost, as usual. It turned out we were near Bagnaia, a small town about 50 miles north of Rome.  In a field adjacent to a house, we saw a man pitching hay from atop an oxen-drawn cart.  (We were delighted with how quaint the farming practices were as we traveled through Italy that first trip which we took in May. However, when we saw only tractors the next year in June, we realized the oxen and cart were being used because it was May and the soil was too wet and soggy for tractors!) The hay was so fermented it was smoking.  The farmer’s wife, a babushka on her head and rubber boots up to her knees, looked very pleased that we wanted to take photos of them. After the “shoot” they invited us inside for a drink of very strong home-made wine. They could not speak English and we couldn’t speak Italian, but we were able to communicate.  Of course, as always, it helped that we had 2 little kids.

This was the beginning of a long friendship. The farmers’ daughter was about our age and had 2 children about our children’s ages. We visited the farmers many times.  We visited once when the daughter was in the OB-GYN ward in the hospital in Viterbo. She shared the room with at least 10 other patients. Unlike the sterile rooms in a U.S. hospital, her ward was practically jumping with visitors ranging from age one to age 80.  One time we visited the daughter and her husband (who drove a tractor for a living) at their new apartment in Bagnaia proper. The community was having a festival in honor of the newly refurbished Church façade. There was a tug of war between the men and women that the women won handily. Our older son, Alex won an undershirt in a race around the piazza. When the local Priest arrived with much pomp and ceremony, all the men (including Ron) quickly disappeared into a cellar to share a bottle of home-made wine.
Click on a photo to enlarge it. 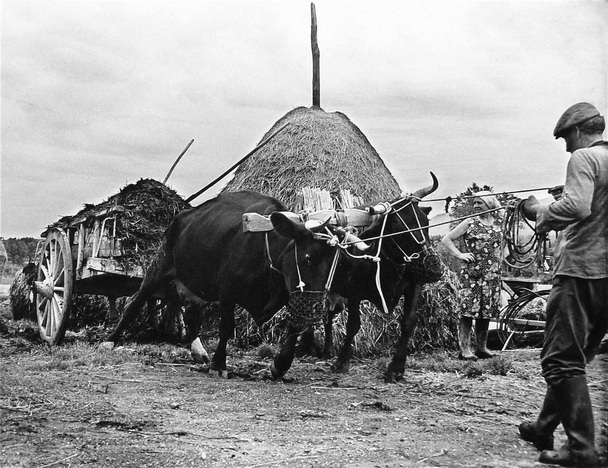 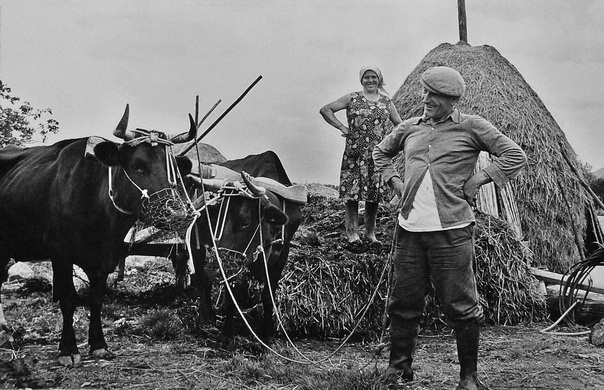 Proud farmers admire their oxen. (They look as if they are on a musical stage set!)